Ajmer – The Land of Gharib Nawaz

All my paradoxical appeal of Euphemisms were laid to rest and my quixotic appeal of religious awakening was laid to rest when I bowed down to the shrine of Moinuddin Chishti at Ajmer Sharif. I felt elevated with a sense of bird leaving his cage created by the contours of his own mind and escaping beyond boundaries beyond human comprehension.

I stood there stupefied at atmosphere which surrounded me. The crowd which surrounded me were filled with souls ready to redeem themselves and pastorate themselves at will and here I stood there without any thought or sense just looking at the tomb wondering at Majar and asking him for divine intervention. The proceedings of my life confounded me and made me ask for more and yet I believe the answer remains within myself which I have to discover by removing the cobwebs that I have laid down for myself. 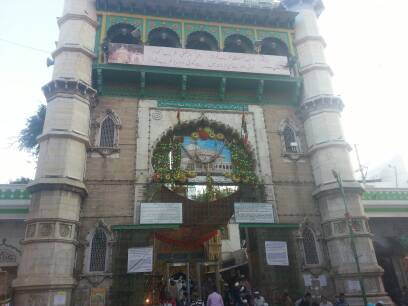 The dargah located at Ajmer is visited from all over the world. The atmosphere is heavy and filled with people waiting to get in and get a glimpse of the shrine. The first time I came here in 2011, I was robbed and well maybe it wasn’t the right time I guess. They say, unless and until you don’t get an invitation, you are not welcome so this time when I went, well everything went according to plan.

I reached the place at 5 in the morning expecting the crowd to be fast asleep in the Ajmer winters but alas, the crowd never dies I guess at Ajmer, I still had to hustle and bustle between the narrow lanes and roads to go in and finally get a glimpse of the shrine. There is a huge pot in between where people share money, rice, food which is commonly collected and cooked and distributed.

Apart from the Dargah, the food here is superb. Especially in winters where you get hot Doodh Jalebi where jalebi is mixed with Doodh and served to you along with Kachoris and Samosa’s. And if you find favour in the carnivorous part of town then the smell of kababs and lamb roasted in coal beside the dargah will be inviting where it’s served piping hot along with Naan or Tandoor.

The only issue I find with Ajmer is the cleanliness which I found was clearly missing. Rats migrating to various places, cockroaches coming out of places, I never could vision them from, Potholes in the road cracking you up and a blanket of dust covering everything which bakes a sad tale but its worth a visit. Try to figure out a hotel near the shrine, I personally stayed at Hotel Madina which was 5 minutes walk away. Decent hotel just don’t expect vegetarians to be entertained anywhere as I had to content myself with chai and fruits.

Often wondering at the quest of life in a whimsical way, he tends to ponder on and on and dribble on life and the pursuit of happiness. If not busy in day dreams, he writes on his travelogues with a humdinger of a funny story.